Carlton of course! My whole family is Carlton and have been going to almost every Melbourne game for more than 20 years. 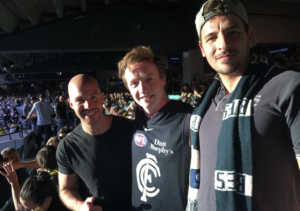 Did you play football?

Yes, for more than 10 years at Berwick Football Club! In an injury plagued career, the one achievement I still hang my hat on today is captaining the Reserves to a winning Grand Final in 2012. Great memories!

Did you play any other sports?

I had about 5 years of playing social basketball at Pakenham. Although I’d hate to admit it my basketball skills were average at best, so my only real job was defending the basket and giving it off to someone who could actually dribble up the court. It was hard not to play like I was on a football ground so giving away fouls was my best skill. I’ve also played some mixed netball, kickboxing and karate when I was younger and was known to get quite competitive in a good old game of table tennis with the boys!

Where did you grow up?

My family all came from the Berwick area and still live there today. I spent my early 20’s living and renovating an old beach house in Safety Beach on the Mornington Peninsula, then had a 4 year city-living stint in Prahran and have recently moved back down to the Peninsula in an attempt to improve my golf game.

There is plenty to like about Insurance Broking! Broking has given me a huge amount of knowledge and experience dealing with an enormous range of industries and taught me things I wouldn’t have learnt in any other career. I’ve always been passionate about promoting the broking industry to aspiring young professionals and contributed to the “Careers in Insurance” initiative by ANZIIF (Australian Institute of Insurance and Finance).

What is the most rewarding part of broking?

It’s definitely helping clients in their time of need. I’ve seen countless devastating losses over my career and am so proud to have helped clients get their businesses back on track. From fires, floods, complex fraud’s, stolen machinery, you name it and I’ve probably seen it!

What insurance broking awards and accomplishments have you had?

I was lucky enough to be nominated for the Young Insurance Professional of the Year and was honoured to have won the Victorian / Tasmanian award in 2014 against some really talented brokers. I was a Warren Tickle Memorial Award finalist giving me the opportunity to attend a 2 day professional development course in Sydney and been awarded as a Young Gun three times in 2014, 2015 and 2017.  I’ve had many articles published throughout the industry’s media outlets and have ghost written a few articles on behalf of NIBA (National Insurance Broking Association) over the years.

Why did you partner with McLardy McShane Insurance Brokers for MMSE?

It is well known that McLardy McShane have always been a destination brokerage. Everyone you seem to speak to about McLardy McShane within our industry have kind words to say and having now joined forces with them, it isn’t hard to see why. Their culture is second to none and they are a genuinely caring organisation. These qualities shine through even brighter once you get to know them.

What’s the most complex claim you’ve ever managed?

I’ve handled countless claims over my career and it would be hard to pinpoint the most complex of them all. One that does spring to mind was a crime claim under a Management Liability that involved a long term employee defrauding the company to fuel a gamlbing habit over a 5 year period. Although complex and requiring a mountain of work, the policy responded to the entire loss and helped put the business back in the position it was prior.